When the 3 of Diamond use the lionhearted strength of their soul card, their influence inspires greatness and optimism in others.

All 3's harbour a mistrust related to the meaning of their suit. The DIAMOND suit symbolizes financial and material values. Thus the 3 of Diamond are often mistrustful of financial institutions.

WHAT IS YOUR SOUL CARD?

Be it in politics or on the podium, the Three of Diamond are bright and personable, optimistic and steadfast in their personal and worldly pursuits. Unfortunately, the overwhelming urge for self-protection in material interests can throw them back on stark uncertainty, and the insecurity of the number "3". Tripping over their own dark thoughts and a deep mistrust of others, the Three of Diamond often fall prey to trickery, and don't receive the appreciation they deserve.

During late teens and early twenties, 3 of Diamond people may become victims of unreliable friends or associates. If they have beauty, material security or some other advantage, they are often subject to jealousy and gossip.

Early marriage is usually filled with such serious obstacles and troubles, it's better for the 3 of Diamond to wait until late 20's before tying the knot. 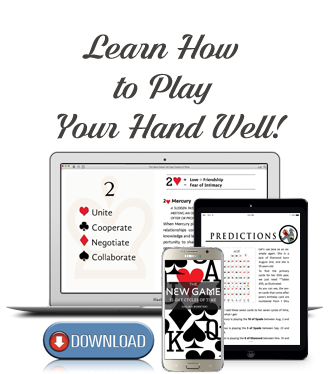