What little we know... 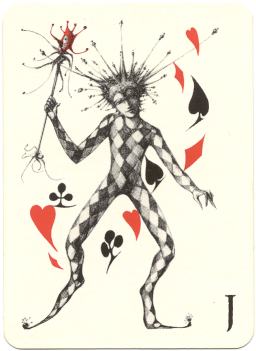 Playing Cards are not mentioned before 1377. Maybe that doesn't sound strange at first, but Petrarch (1366) doesn't mention them though he mentions lots of other games. Boccacio (1370) goes out of his way to mention long lists of games played by the people and he doesn't mention them either.

All of a sudden, in 1377 there are 4 references (Florence, Paris, Basle, Sienna) - a couple of them call them "The New Game". Then between 1377 and 1390 there are 19 references to Trionfi - (Italian for Playing Cards). More important, none of these early 19 references are to Tarocchi (Italian for Tarot).

A lot of the details were worked out in a series of articles in the Playing Card, the journal of the International Playing Card Society and the best overall summary is in Michael Dummett, The Game of Tarot (unfortunately out of print)." - Courtesy of Bob O'Neill 1998/05/22